At first this algorithm felt a bit magical to me. There were things going on I wasn’t entirely wrapping my head around, and when I stepped through the algorithm I got lost at the inverse matrix multiplication. In addition, the “Mouse Picking” article normalizes the world space values, which we don’t need.

The algorithm requires an understanding of matrix math and how normalization works. I wasted some time working on a loose understanding, which resulted in introducing more errors and second guessing myself as I tried to locate the error in my calculations. A couple times I resorted to manually calculating the transformations on paper. 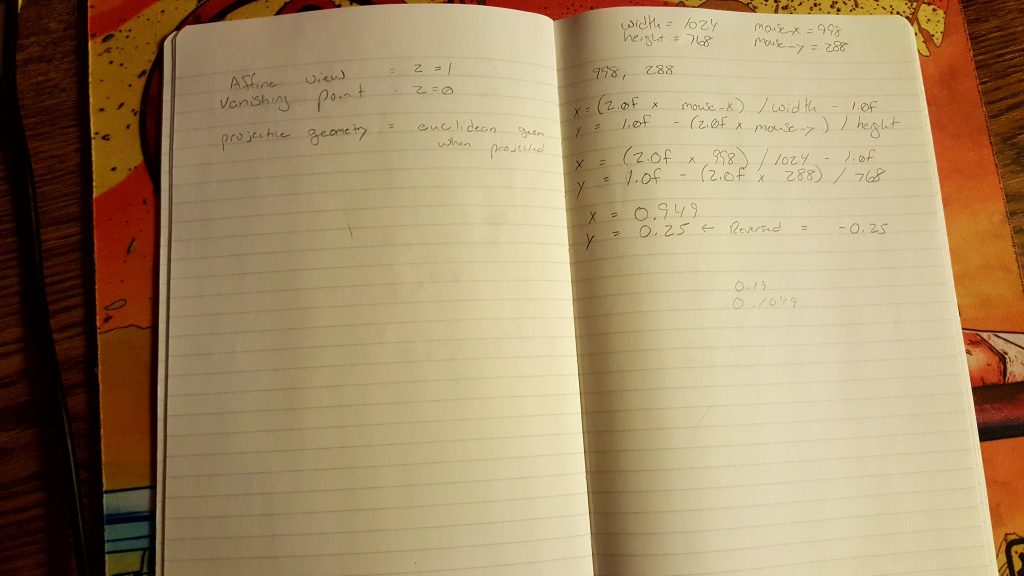 The Fourth Component
When working with transformation, the W component is meant to represent if the vector is directional (W=0) or positional (W=1). In my tinkering, I made the mistake of setting incorrect values for that fourth component.

Mouse cursor vs Clicked Object
Another point of confusion was assuming the depth of the object would be calculated from the above conversion function. The function above is converting the coords for the mouse pointer, which exists at the projection depth, not the object that is being clicked. This is important, because the X and Y coords change as the depth changes due to how perspective works.

In order to drag an object in 3D space there needs to be some type of translation between the screen view and the world view so the coords can be transformed.

Doing the transformation yourself isn’t always required, some frameworks do this for you, and the matrix math is hidden away. However, understanding the concepts and what is happening in the background is good to know. For example, Unity has local and world coords, as well as raycasting functions.

By the time I figured out the transform problem (which was a while due to getting distracted) Tiled came out with some features that actually addressed part of my original problem. In addition, it is now open sourced, open for collaboration, and uses the QT framework. Given I have the time, I will be focusing my efforts on contributing to Tiled instead of rolling my own.