I’ve started a game project with my wife, who is a 2d artist. Among the titles we’ve thrown around, Canabaliced (Canabal – Iced) seemed most appropriate. The premise of the game (so far) is you’re a popsicle struggling to survive the heat. And how does he survive? Just the way we do, by eating icy treats, including other popsicles!

The game’s theme was inspired from a challenge by Game Prototype Challenge.  We didn’t end up submitting anything, but we still got an idea to run with.  There’s a lot of ideas being thrown around, shot down, prodded, and dissected, but it’s gaining speed and direction. I see this game concept having a lot of potential, especially with the plethora of frozen treats that exist. But first things first, we need to settle on perspectives, game mechanics, and artsy things. 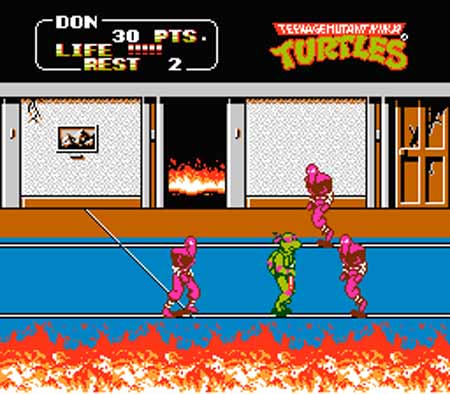 For perspective and game mechanics, I’m thinking of designing the levels similar to Teenage Mutant Ninja Turtles II and Double Dragon II: The Revenge. We’ll start off with the level mechanics of Turtles, and later add the more advanced level design elements from Double Dragon, like climbing ladders, and the slight change of terrain perspective/mobility where the characters can only move horizontally.

Weaponry will be another fun thing to play with, including melee, and… ehrm… projectile types.  It will be all out popsicle pandamonium. One idea is to have the player and enemy spit or vomit popsicle juice, with different colors of juice having their own effect; poison, “fire”, slow, etc. There’s room for rocket(pop) launchers, “cherry bombs”, and chocolate mint sprinkle somethings. I need to fit an ice cream sandwich somewhere in there too.

Maybe at some point, there will be a online two player mode just like Turtles, and Dragon.

One twist I am intending on using is to have the character’s main weapon use his health as the ammunition.  Any additional weapons will have a small supply of ammo,  meaning the player will need to be cautious using their weapons. The player will be able to restock their main weapon (popsicle spit) in two ways: by obtaining ammo deposits throughout the levels or by consuming NPCs (the good and the evil). I’m thinking of adding some type of morality meter for the second option, which would apply some type of consequence if the player decides to take the easy route and destroy innocent NPCs.

This basically encapsulates the initial concepts and ideas. I have some developments I will be sharing in some future posts. I think the biggest challenge with this game will be not to make it too serious, or filter the concept. After the idea settled, and reason began returning, I had several parental sensors going off in my head. The same ones I have to ignore when watching Adventure Time (which much of the humor is or will be inspired by). It’s not meant to be serious, it’s meant to be fun. Even so, I still want to give this enough depth to make it more then a game that you play for a few minutes and never touch again.

I’ll be posting more as we progress, including some tutorials and AS widgets. Stay tuned!